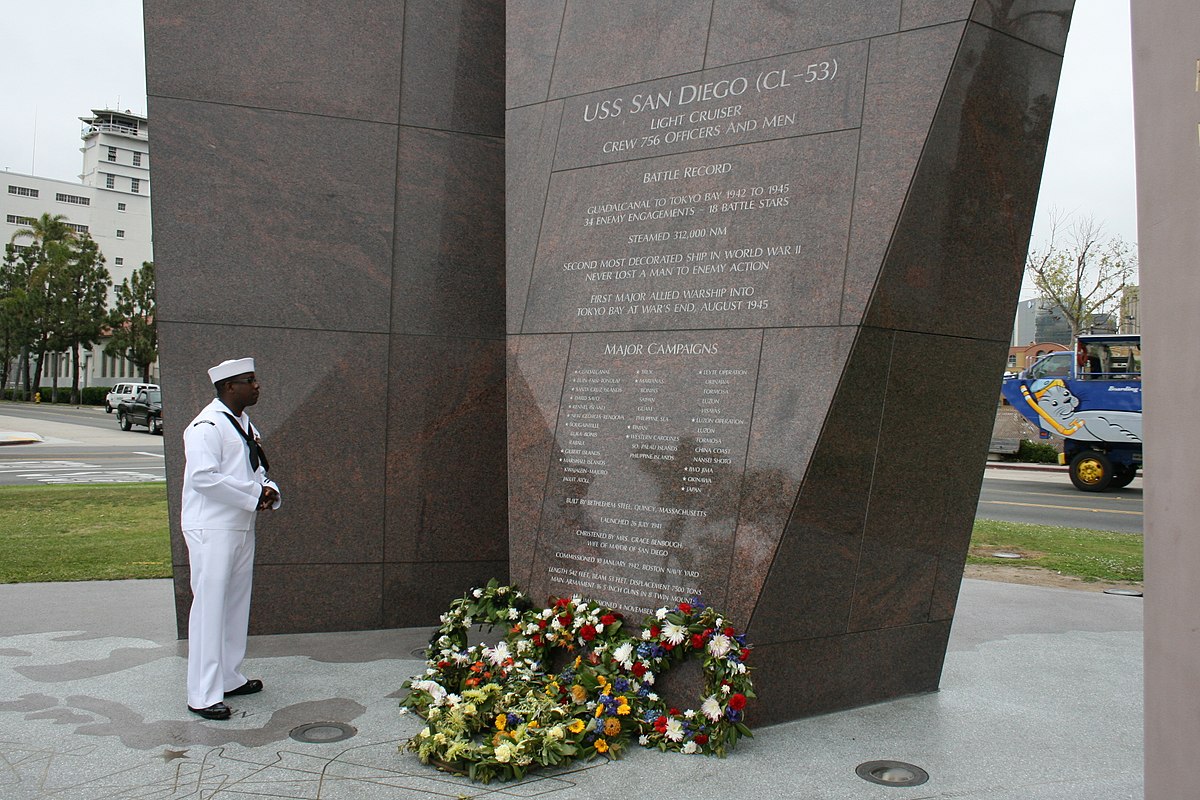 This monumental public artwork provides long overdue commemoration of the distinguished service of the cruiser USS San Diego and her crew, serving as a perpetual reminder of their selfless contribution to victory in World War II. The memorial is an original artwork designed by noted sculptors Eugene Daub and Louis Quaintance for the USS San Diego (CL 53) Memorial Association, which is donating it to the Port District for the benefit of the people of San Diego. The memorial’s complimentary components serve to remember, inform, illustrate and inspire. 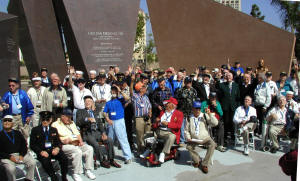 The monument’s soaring 28-foot apex, which resembles a ship’s bow, forms a distinctive landmark on the San Diego waterfront. Four adjoining walls of polished carnelian granite and composite terra cotta are arranged on a V-shaped footprint, which encompasses a magnificent artistic map of the Pacific Theater. The colored terrazzo map depicts the ocean areas and contiguous land masses of East Asia, Australia and the Pacific islands. Embedded brass and zinc strips mark the wartime track of the USS San Diego as well as the equator, latitude and longitude lines. Brass lettering identifies key geographical features, and five-pointed brass stars mark the engagements for which the ship earned its 18 battle stars in World War II. 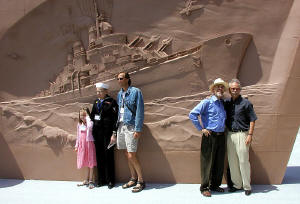 The south side of the memorial’s terra cotta wall features a dramatic bas-relief artwork by Eugene Daub and Louis Quaintance that depicts the San Diego in action at sea. The artist’s life-size bronze sailor sculpture on the opposite side of this wall, overlooking the Pacific map, is the humanizing focal point of the memorial. The sailor represents all the crewmen who ‘ served on the San Diego and is emblematic as well of all sailors who served in World War II. He is shown in relaxed battle dress, perhaps after a major action or long hours on watch or at general quarters. Though appearing weary and exhausted, he remains undaunted and resolute.

Inscriptions on the inner panels contain historical details and a summary of the San Diego’s accomplishments, including a list of major actions she participated in between 1942 and 1945, from Guadalcanal to Tokyo Bay. Campaigns for which battle stars were earned are so indicated, correlating to the brass stars on the map. The names of all the officers and men who served on the ship are engraved on two polished granite panels. Above these appears a simple inscription, an excerpt from Admiral Halsev’s congratulatory message to his fleet after its pivotal victory in the Naval Battle of Guadalcanal: “You have written your names in the golden pages of history and won the underlying gratitude of your countrymen.” 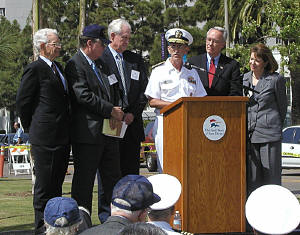 Admiral Edney was commissioned in the Navy as an Ensign in 1957, and he retired in 1992 after having served as NATO’s Supreme Allied Commander and Commander in Chief of the United States Atlantic Command. Other positions Admiral Edney held include Chief of Naval Operations, Chief of Naval Personnel, Commander of Carrier Group One, Director for the Office of Program Appraisal for the Secretary of the Navy, Director of Aviation Plans and Requirements, Commanding Officer of the USS Constellation (CU 64), and Commander of Carrier Air Wing Two. He also served as a White House Fellow in 1970. His many honors and decorations include the Defense Distinguished Service Medal, Distinguished Service Medal with Gold Star, and Air Medal with Gold numeral 6.

Now in his seventh term in the U.S. House of Representatives, Congressman Cunningham serves on the House Appropriations Committee, the Labor, Health and Human Services Committee, the Education Appropriations Subcommittee, the Defense Committee and the Select Committee on Intelligence. A former Naval Aviator, Congressman Cunningham was one of the most highly decorated pilots in the Vietnam War. He was nominated for the Medal of Honor, received the Navy Cross, two Silver Stars, fifteen Air Medals, the Purple Heart and several other decorations. He was a fighter pilot trainer at the Navy Fighter Weapons School and is a former Commanding Officer of the elite Navy Adversary Squadron.